A few weeks ago we wrote on the topic of context, and examined market returns across time periods ranging from a single week, to the past year, and stretching out further to a three-year view. Each period told a different story and offered differing insights on the recent path of economic growth. Last week we reflected on difficulties facing the global supply chain, again zooming out from the current moment of high lumber prices to understand the root causes that stem from the housing crash more than a decade ago.

This week, a similar exercise in zooming out can offer perspective on two different rates that impact market prices and economic growth: tax rates and mortgage rates. Both are on the rise, and history tells us that is not such a bad thing.

Taxes on the Rise

The Biden administration recently introduced an array of new tax proposals that aim to raise government tax revenues from the wealthiest Americans.1 These proposals include increasing the capital gains tax rate for anyone earning more than $1 million per year, partially eliminating the cost basis step-up on stocks and real estate at death, and raising the corporate tax rate to 28%.2 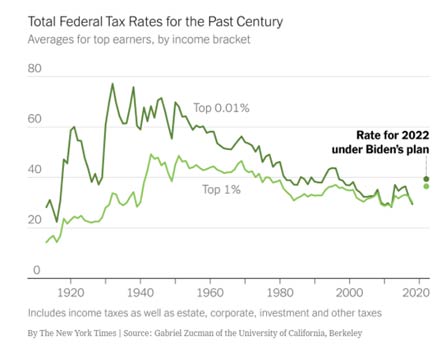 After nearly 25 years of declines in the top tax rates on personal incomes, inheritances, and corporate profits, Biden’s proposal to increase taxes is being panned by some critics as radical. History tells us it isn’t. Based on past periods of elevated tax rates, the current proposal is unlikely to have the harmful effects on economic growth that its critics are claiming. In the 1990s, the last time tax rates were as high as the ones Biden has proposed, the economy boomed. It also grew rapidly after World War II, when tax rates were higher yet.3

In theory, increasing taxes on corporate income and capital gains should make the investment in stocks less appealing. In reality, the outlook for economic growth and corporate profits is far more influential in investor decision-making. If you add in a resilient market — when politicians typically propose these increases — higher taxes are even less of a deterrent. That doesn’t mean there won’t be short-term volatility while investors assess the impact of new taxes on corporate earnings, but higher taxes alone are unlikely to derail the recovery. Used effectively, those additional revenues can help reverse the income and wealth inequality that was exacerbated by low taxes over the last forty years, and in doing so potentially accelerate broader economic growth.

While higher tax rates are merely a proposal at this point, the average rate for a 30-year mortgage has been increasing since January. Like higher taxes, a shift to higher mortgage rates can be interpreted to be a headwind for economic growth and housing affordability. In a vacuum, that is true. In reality, the environment that leads to higher rates often overlaps with a period of increasing economic optimism.

Most consumers pay little attention to 10-year Treasury notes, but the rate on the benchmark bond directly affects how much Americans pay for their mortgages. The 10-year Treasury acts as a reliable indicator of economic sentiment and a key benchmark for mortgage rates. Another way of understanding this context is that mortgage rates move higher when investors begin shifting money out of safer bonds and into riskier investments like stocks. This pushes bond yields (and mortgage rates) upward and generally coincides with periods of improving job markets and rising wages that can offset the higher housing costs.

The graph above also reminds us that even with the recent uptick in rates, we still remain near historic lows. Homebuyers in the late 1980s were happy to get a 30-year mortgage with an interest rate of 10% – a level that feels almost punitive based on today’s low rates – and yet, the subsequent decade enjoyed significant economic growth.4 Lower rates definitely support higher housing prices, and greater affordability in many cases, but the spectre of higher rates should be evaluated in the context of an improving economic landscape.

The greatest strength of businesses and US households is adaptation – not only the kind we’ve seen and written about over the past year in the face of a disruptive pandemic, but also the kind of adaptation that takes place when tax policy and regulatory priorities shift over time. Our intention is not to downplay the headwinds posed by higher tax rates or increased mortgage costs for homebuyers. Rather, we want to highlight that the US economy has enjoyed periods of economic progress and market growth during decades that included higher taxes and mortgage rates relative to current levels.

Further, when we zoom out to see the historical context it becomes clear that both mortgages and taxes are near all-time lows. Just as we’ve written about interest rates in recent months, let’s not confuse the process of normalization and re-opening with the fear of runaway trends. Mortgage rates are not increasing to 10% any time soon, and the tax law changes still face many hurdles and potential changes before they become law.

Change is part of life, and similarly, it is part of market cycles. We support our clients as market conditions and tax policies change, and more importantly, as factors in their own life necessitate shifts to their risk tolerance or need for liquidity. History doesn’t provide a perfect roadmap, but it can offer a useful perspective as we navigate forward.

4 Historical Mortgage Rates From The 1970s To 2021: Averages And Trends For 30-Year Fixed Mortgages Rocket Mortgage

Back to the Future: Electric Vehicles