When Tomorrow Looks Different Than Yesterday

Brian Kozel
Previous Next
When Tomorrow Looks Different Than Yesterday

When Tomorrow Looks Different Than Yesterday

This week global stock markets wrapped up a month of recovery fueled by optimism that efforts to slow the virus are working, and our economy will be able to accelerate in the not so distant future. The S&P 500 is well above its recent lows on March 23rd, although on an absolute basis it is still down from its high, and small and mid-sized companies remain down even further. These early signs of a flattening curve are allowing investors to raise their eyes beyond the existential crisis, take a deep breath, and turn their attention to new economic data and corporate earnings.

There is plenty of unpredictability and rough road ahead. Earnings announcements are providing examples of the challenges even for companies that are relatively resilient. Amazon – a perceived case of success under difficult circumstances – announced on Thursday that surging sales during the shelter-in-place orders were not enough to blunt the impacts of the virus disruption. Higher costs for shipping, disrupted supply chains, and increased pay for essential employees led their profit to decline by 29% from one year ago, and Q2 is expected to be much worse. The path for brick and mortar retailers is even more daunting (see: J Crew [1]).

In the short term, more data gives investors traction on the road forward, and this week brought some key points. First, we learned that the US first-quarter GDP (the total value of goods produced and services provided in a country) decreased by -4.8% on an annualized basis. Beyond that, the pace of weekly initial unemployment filings continued to slow, but the total number of unemployed Americans surpassed 30 million. And on the financial front, the Fed announced that it would keep interest rates near-zero and expand its $600B lending efforts aimed at small and mid-sized businesses.

The gross domestic product measures the past, unemployment frames the present, and the Fed’s financial support is intended to keep the wheels of economic activity turning to move us into the future. Each of these data points forms a piece of the puzzle that investors use to determine what happens next in financial markets. As for the broader economy, the lessons of the coming months will help define the further need for radical and innovative economic development.

The Past: GDP Declines Measured

GDP is a darling statistic of the media because it distills all economic activity down to a single number. The simplicity is alluring. The information it reflects, though, is entirely in the past and doesn’t necessarily help us know what will come next. In Q1 2020, the -4.8% contraction was widely expected, and only partial, including economic impacts of pandemic response that began mid-March. The pandemic’s impact on Q2 will be far more severe, with estimates as high as -20% GDP in the months of April through June.

The market attempts to incorporate these changes to economic activity in real-time, and checks those estimates against the real economic changes once they are tallied up and measured. In this case, the expectation was for -3.7% GDP, and the actual number was worse, at -4.8%. By the time that backward-looking number is known, though, the market has moved on. Much of the recovery of market prices in April was based on a forward view; it had discounted the Q1 GDP decline in favor of a focus on the next step: phased plans for economic re-opening, and coronavirus testing and treatment efforts. 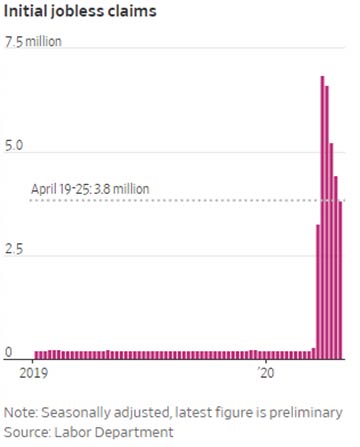 Unlike GDP that covers data from up to 4 months ago, the tally of unemployment claims is calculated weekly. The recent numbers have been staggering. The total number of unemployed Americans surpassed 30 million people this week, suggesting the April unemployment rate could top 20%. Further, many people haven’t been able to apply for unemployment due to overburdened and outdated online systems that have been crashing.[2] This means the official tally of claims is almost certainly an undercount.

The pace of unemployment filings is slowing, though, which is key. Claims in 46 states have declined since the last full week of March.[3] This supports the hopes of investors that the worst may be behind us. Looking forward, phased re-openings mean that some workers in California and other states will be able to resume activity very soon, but others will have to wait months before normalcy is attainable.

The equity market has rallied on the narrative of economic re-opening. We are wary that too much optimism is priced in about a path to normalcy that is still fraught with risks of virus uptick, as well as expectations that consumers will return quickly just because policy is loosened. True recovery and job creation may require more substantial efforts, even public-private partnerships akin to Depression-era programs that instead focus on climate remediation, sustainable energy, and infrastructure.[4]

The Future: The Fed and QE Infinity

The Federal Reserve provided future guidance when it announced on Thursday that it will keep interest rates at near-zero “until it is confident that the economy has weathered recent events and is on track to achieve its employment and inflation goals.” This provides relief to corporate borrowers and US households in the form of low-interest and forgivable loans. Combined with the decision to expand qualification rules for its forthcoming $600 billion lending effort designed to reach small and midsize businesses hit by the coronavirus pandemic, the Fed is making significant efforts to stabilize the market and encourage investment.

Demand for mortgage refinances has also seen massive increase at these low rates – though many borrowers with jumbo mortgages have not been able to benefit as the CARES Act limits government re-purchase of these loans causing banks to charge higher rates or curtail the loans altogether as they manage their own risks.

Putting the Puzzle Together: The Next Year, and the Coming Decades

The GDP of the past, the unemployment claims of the present, and the Fed stimulus of the future help us see a way forward, but it is a cloudy picture. While certain medical trials have shown promise, experts warn we are months if not years away from a vaccine reaching broad distribution. Testing is a key element of effective health policy to support the economy, and the development and rollout remains uncertain.

Meanwhile, educational institutions at all levels are rapidly innovating to come up with a hybrid instructional experience that will support students, as well as parents returning to work. State and federal agencies are trying to mitigate the economic disruption. Federal leadership will be re-assessed in the fall elections, and leaders at all levels will have the opportunity to think big. We hope they think big enough, and consider all stakeholders and future generations, and create a multi-year approach to not just restarting the economy but also to building forward-thinking engines of economic growth.

For our part, we measure our investment time horizon in decades, and as such, we remain diversified and focused on the positive impact our investment choices can have in building that future, both for our shared economy and the resiliency of our clients.

[4] The U.S. Needs Way More Than a Bailout to Recover From Covid-19 https://www.bloomberg.com/news/features/2020-04-30/bailout-isn-t-enough-for-economy-to-recover-from-coronavirus?sref=y9UKZurm