The Power of the Shareholder Vote

Sarah Green
Previous Next
The Power of the Shareholder Vote

“The right to vote is the most powerful nonviolent tool we have in democracy. I risked my life defending that right.”
– Congressman John Lewis, John Lewis: Good Trouble

The power to vote at the ballot box is an act won through hard fought battles that continue today.  We are on the eve of a historic election, and one of the most important ways we can create a more fair and just society is by ensuring equitable access to the ballot box. The Shelby County vs. Holder decision by the Supreme Court on June 13, 2013, ruled a section of the Voter Rights Act of 1965 unconstitutional.  This decision allowed local jurisdictions to pass local election laws without federal review that can harm minority voters and low-income voters and suppress this crucial access.

Since the Supreme Court’s decision in 2013, over 1,600 polling places have been closed. Many states have added stricter voter ID laws, purged millions of voters from the rolls, and newly gerrymandered districts to shift voter proportions. In particular, voter ID laws currently exclude over 21 million citizens without government issued IDs; predominantly, low-income voters. The US Government Accountability Office has estimated those ID laws reduce voter turnout by 2 -3 percentage points.1

Voting in the Board Room

As investors, we are also on the front lines of the ballot box in the board rooms of corporations.  As partial owners in a company, shareholders have a right to express their views on wide ranging issues, often aligned with consumers’ and communities’ interests. Corporations have a lot of power in our lives, from the food we eat to the clothes we buy and the way we transport ourselves from place to place.  We work at these businesses; they operate in our communities. As shareholders, we have the opportunity to strengthen the corporations themselves, as well as our society as a whole, with the power of our shareholder vote.

Since the 1960s, when the Voter Rights Act was first passed, corporations have gained an immense amount of power in our lives supported by pro-business government policies. Though it may sound counterintuitive, an important counterbalance to that increased corporate power is the shareholder. Shareholders are owners, and in addition to sharing in the income and profit of the corporation, they have a right to be heard by the board of directors. Joining with other shareholders on key issues, investors have a louder voice to advocate for change from within and help direct corporate action in our lives for good.

Recently, the government has pursued efforts to limit shareholder participation, and restrict the investors’ ability to express an opinion on social and environmental practices at the companies they own. In early October, the Securities and Exchange Commission voted 3-2 to adopt Rule 14a-8, which restricts access to the shareholder vote by increasing the ownership requirement, limiting each shareholder to filing on a single issue each year, and limiting the length of the issue description.

Written comments to this potential new rule were overwhelmingly (85%) opposed, arguing instead for more access to enliven the conversation on corporate accountability. (North Berkeley submitted a comment letter in opposition.) The rule effectively disenfranchises investors and concentrates more power in corporate management.

Nonetheless, we know from John Lewis and so many others that the act of democracy is an ongoing one. As financial advisors to a wide range of clients who care both about asset growth and social impact, we feel it is our responsibility to raise our voice to policymakers in support of this mechanism for democratic involvement.

On the table now is a Department of Labor proposal intended to further limit the ability of investors and their advisors to consider “ESG” issues in asset management. The proposal suggests that ESG considerations are not financially material, reversing their precedent from 2015. At that time, they clarified that ERISA governed retirement plans “need not treat commercially reasonable investments as inherently suspect or in need of special scrutiny merely because they take into consideration environmental, social, or other such factors.”2

The 2015 clarity aligned DOL policy with current investment industry conviction that it is an investment manager’s fiduciary duty to consider the risks that arise from actions impacting governance, environmental regulation compliance, and social impacts. No decision has yet been made, but of the more than 8,700 public comment letters submitted during the brief 30-day open window, fully 96% opposed the proposal.3

Beyond the framework of government regulation, engaged investors have several tools to push for tangible change. By creating coalitions of investors through mutual fund ownership and other networks, investors work together to activate meaningful dialogue with companies on environmental, social, and governance issues. Sometimes that engagement via dialogue is enough to inspire change.

When dialogue alone isn’t enough, shareholders can take the conversation to the board room and present ‘resolutions’ to move forward ideas that strengthen the business in the long term. A strategy of ‘last resort’ leverages legal action to innovate change otherwise resisted by corporations. All of these strategies gather shareholders and other stakeholders to partner up and express a shared voice on a focused issue.

Shareholder resolutions can be rejected by the SEC, withdrawn due to progress of the company on that issue, or may go to vote at the annual shareholder meeting. All shareholders then get the right to ‘vote their shares’ and go on record supporting or rejecting that proposal. We vote proxies on behalf of all of our clients, not otherwise voted by mutual fund companies. Shares are voted in ways that support systemic change and, we believe, strengthen companies and the broader economy, in turn.

An example of the arc of engagement from one of our fund partners regarding board and gender diversity helps to see how these strategies combined culminate in progress. 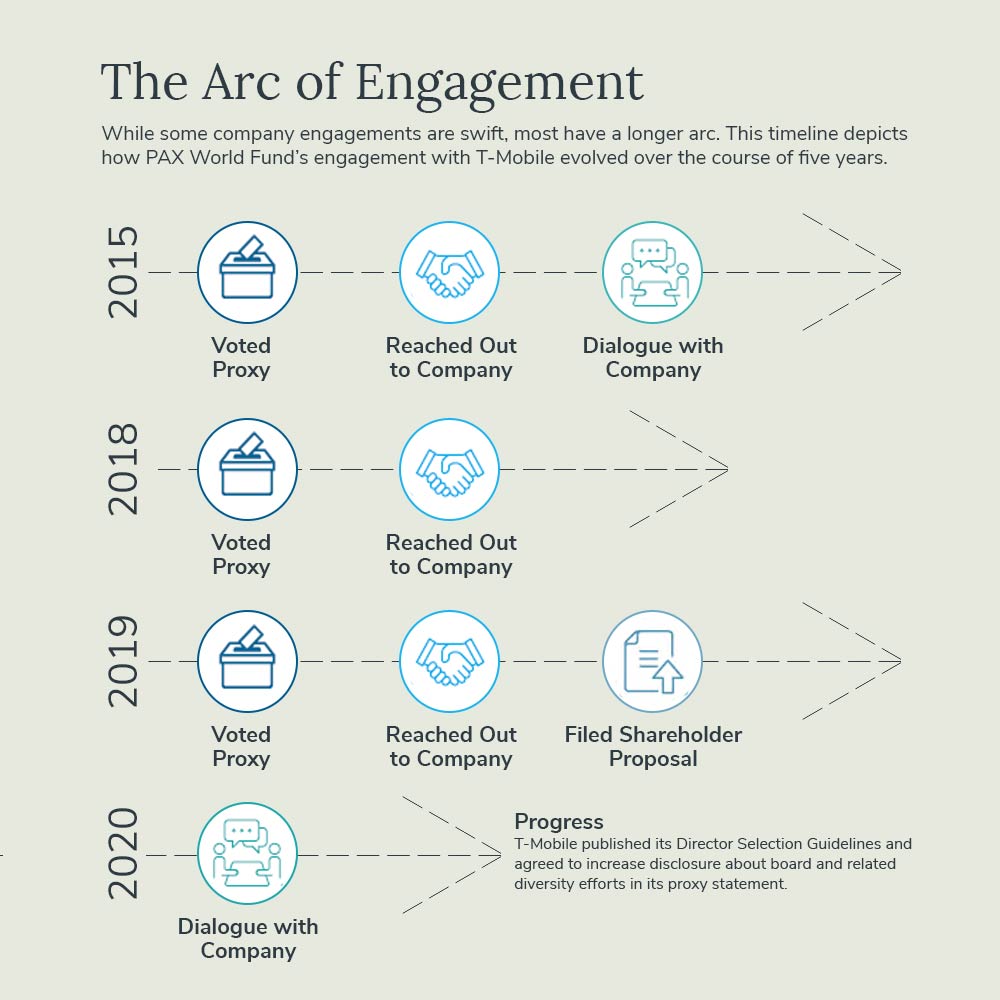 How Does My Voice Matter?

While any one investor may not see the power in their voice, our shared strength is measurable.

In 2020 alone, shareholders filed resolutions in support of climate solutions, from asking banks to disclose fossil fuel lending and the green-house gas emission footprint of their lending, to asking energy companies to report on petrochemical risk and impacts on community water supply.  Disclosures on workplace safety, racial, and gender diversity were also themes investors asked companies to report upon.

Even though the US government pulled out of the Paris Agreement, shareholders went on record in a significant push this year, asking companies to publish targets that align with the goal of the Paris Climate Agreement to limit global warming to below 2C above preindustrial levels. Resolutions create change, and they can return to the ballot the following year if they earn enough votes from other shareholders. So, they create a long arc of conversation with a company, even though most of them are non-binding results.

Our shareholder collaborations are removing antibiotics from chicken and food supplies, protecting forests from deforestation, protecting bees and pollinators, encouraging diversity and inclusion in leadership, and requesting more companies to disclose material information related to the Sustainability Accounting Standards Board. You can track resolutions from one of our trusted partner organizations, As You Sow, a Berkeley-based nonprofit that harnesses shareholder power to create lasting change that benefits people, planet, and profit.

At North Berkeley, we believe that mutual funds provide a strong framework to exercise the shareholder vote in collaboration with others. We collaborate with mutual fund companies, nonprofits, and industry partners to steward capital in ways that move toward a healthier, more inclusive economy.

Some clients may own individual holdings through legacy, equity compensation, or other avenues. Individual stock holdings concentrate risk in one company, and they sometimes can carry with them outsized tax impacts to diversify. However, participating in shareholder resolutions is one way to activate and engage those shares to support systemic change.

In 2020, North Berkeley Wealth Management clients filed resolutions that moved the needle in favor of transparency and the environment at Duke Energy and Wells Fargo.

At Duke Energy, the company agreed to publish a report assessing how it will mitigate the public health risks associated with Duke’s coal operations in light of increasing vulnerability to climate change impacts such as flooding and severe storms. In the transition from coal to natural gas, Duke is now retiring coal ash ponds. Capping the coal ash ponds in place is like a teabag steeping in the community water supply as there is no barrier between the coal ash sludge and the water table. As part of this work, Duke agreed to excavate and add a liner to the coal ash ponds in North Carolina rather than capping them in place.

At Wells Fargo, agreement was reached and the resolution withdrawn asking them to report how they intend to reduce the GHG emissions associated with its lending activities in alignment with the Paris Agreements goal of maintaining global temperature rise below 1.5 degrees Celsius.

Freedom is not a state; it is an act.

Despite the increased restrictions of Rule 14a-8 and voter suppression tactics in other venues, we remain hopeful of increasing collaboration for change. While the power of corporations has grown, so has the network of coalitions to harness the power and the investors’ attention as a whole.  We will continue to lean into our network of engaged citizens and shareholders, write letters, and engage with policy makers related to our work in the world of investing. If the way to handle power is with power, we have a lot to inspire us as we head toward 2021.

“But we must accept one central truth and responsibility as participants in a democracy: Freedom is not a state; it is an act. It is not some enchanted garden perched high on a distant plateau where we can finally sit down and rest. Freedom is the continuous action we all must take, and each generation must do its part to create an even more fair, more just society.”

Necessity – The Mother of Invention